Hello Chief!! Are lost the JET too?
.. I mean SKYHAWK

1. My conversation with a retired Air Force General about the missing F5E jet engine led to me to an interesting story. I was intrigue when he cajole told me that there is nothing to be shocked about a missing engine when an entire fleet of aircraft went missing from the TUDM inventory.

Entire fleet of aircraft! What was he talking about? I thought he was kidding and making his usual jokes about aircraft missing from the radar screen but when he said that it was missing from the TUDM inventory that led me to place few more calls.

2. It appears that via a special G to G arrangement, the Malaysian government bought 80 A4 Skyhawks from the USAF in the 80’s. It was delivered to us at the beginning of 1984. These are working aircraft with plenty of mileage to go. 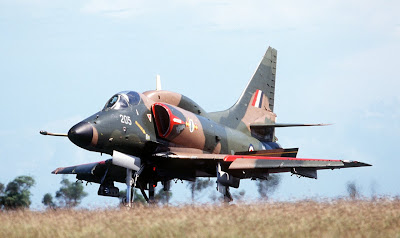 Thirty five aircraft was brought back to Malaysia and was used in the service. A few dropped from the sky, one went missing over South China Sea (Lt. Wahi) and the rest was used until it could not be used again. Some became spare parts. The balance (45 jets) was left in the California dessert parked under the scorching sun. It was never brought back.

3. The 45 aircraft that was left in the Californian dessert was never brought back. It was place under the management of a company in the US. This company ends paying the parking chargers for years.

Sometime between the years 2000 to 2003, RMAF decided to take back the aircraft and sell them off. Our TUDM officers from KL were sent to look for the aircraft in the dessert. They found it but the shocking part is that they no longer legally own the aircrafts.

4. As it turns out, the paperwork involving the purchase went missing and the Air Force were not able to show proof of ownership. Therefore they could not take out the Skyhawks from the open air parking area. The haggling and tussle over the ownership continued for several years until it became clear that the aircraft ownership cannot be ascertained. The Malaysian government paid for it but did not kept the receipt.

5. I remember the matter was raised in parliament several years back and unverified reports indicates that the aircraft was sold to an American company for pittance. Maybe our MP’s should revisit this matter again.

My friend was right when he said entire fleet of 45 aircraft disappeared from TUDM Inventory. In actual fact it was not even recorded in the TUDM inventory. Since it did not go into our books despite paying for it and having no receipt to show proof of payment, then no aircraft actually went missing. The only thing missing is the money for the 55 aircraft!

6. Coming back to the missing RM50 mill engine which is fixed on a USD 2 mill aircraft, I am perplex to read in the papers today that a Brigadier General and his 40 man was asked to leave service early. (Sounds like Ali Baba and the 40 thieves).

They was not charged. There was no court martial. It appears the General and several others lose their pension but upon appeals got it back. What the heck is wrong with the system? No one even realized that the General was asked to leave until the story came to limelight in today’s news. I am sure we all can predict on why the story was released to the MSM today. It wanted to show that the government did something.

7. I am not sure whether taking administrative action is sufficient in this case. We are talking about CBT. We are talking about a missing RM50 mill jet engine that was supposed to be fitted on a USD 2 mill aircraft. Knowing the Malaysian way of wanting to settle problems, it was managed quietly the wrong way. In the meantime, everyone had forgot about the 55 aircraft that Malaysian Government paid but not admitted into TUDM inventory. Maybe they went into the army or navy inventory. Who knows mixed up can happen.
Dicatat oleh geroboksepatu di 12:56 PTG