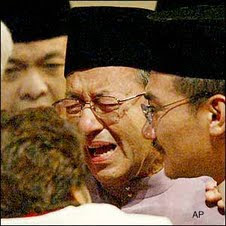 
Many snouts in the public trough / Grand Theft Malaysia

The Port Klang Free Zone scandal may be big, but it is only the latest in a long line of Malaysian scandals going back to the early 1980s. Time Magazine quoted Daniel Lian, a Southeast Asia economist at Morgan Stanley in Singapore, saying that the country might have lost as much as U$100 billion since the early 1980s to corruption."

The scandals listed below are only a small sample of the looting of the country's coffers:

In July of 1983, what was then the biggest banking scandal in world history erupted in Hong Kong, when it was discovered that Bumiputra Malaysia Finance (BMF), a unit of Bank Bumiputra Malaysia Bhd, had lost as much as US$1 billion which had been siphoned off by prominent public figures into private bank accounts. The story involved murder, suicide and the involvement of officials at the very top of the Malaysian government. Ultimately it involved a bailout by the Malaysian government amounting to hundreds of millions of dollars.

Mak Foon Tan, the murderer of Jalil Ibraim, a Bank Bumi assistant manager who was sent to Hong Kong to investigate the disappearance of the money, was given a death sentence, and Malaysian businessman George Tan who had participated in looting most of the funds, was jailed after his Carrian Group collapsed in what was then Hong Kong's biggest bankruptcy, and a handful of others were charged. No major politician was ever punished in Malaysia despite a white paper prepared by an independent commission that cited cabinet minutes of Prime Minister Mahathir Mohamad giving an okay to a request to throw more money into the scandal in an effort to contain it.

That was just the first Bank Bumi scandal. The government-owned bank had to be rescued twice more with additional losses of nearly US$600 million in today's dollars. Ultimately government officials gave up and the bank was absorbed into CIMB Group, currently headed by Nazir Razak, the prime minister's brother. That scandal, which stretched over several years before its denouement in 1985, set the tone for 24 years of similar scandals related to top Malaysian officials and was the first to prove that in Malaysia, you can not only get away with murder, you can get away with looting the treasury as well.

Perwaja Steel, for instance, lost US$800 million and its boss, Eric Chia, a crony of Mahathir's, was charged with looting the company. He stood trial, but was acquitted without having to put on a defense.

In the mid 1980s, the Co-operative Central Bank, a bank set up to aid the Indian smallholder community, had to be rescued by Bank Negara, the country's central bank, after hundreds of millions of ringgit in loans granted to a flock of United Malays National Organisation and Malaysian Indian Congress politicians became non-performing. Some had never been serviced at all. Although the chief executive and general manager were charged with criminal breach of trust, none of the politicians were ever charged.

Before that, the Malaysian government was believed to have lost US$500 million in an attempt at Mahathir's urging to corner the London tin market through a company called Maminco, driving the world price of tin from US$4.50 per tonne to US$7.50. It then sought to cover up the loss by establishing a US$2 company called Mukawasa from which allocations of new share issues to the government's Employees Provident Funds' were diverted. Mukawasa expected to sell the shares at a windfall profit to hide the tin speculation.

Mahathir also was behind an attempt by the then governor of Bank Negara, the central bank, to aggressively speculate in the global foreign exchange market. Bank Negara ended up losing an estimated RM20 billion. The governor, Jaffar Hussein, and the head of forex trading, Nor Mohamed Yakcop were forced to resign.

There have been many other political and financial scandals since. In 2005, Bank Islam Malaysia, the country's flagship Islamic bank, reported losses of RM457 million mainly due to provisioning totaling RM774 million as a result of bad loans and investments incurred by its Labuan branch. Cumulatively, Bank Islam ran up nonperforming loans of RM2.2 billion, partly from mismanagement and poor internal controls but also "years of regulatory indifference fueled by the misconceived notion of an untouchable Bank Islam because it was a favorite child of the Malaysian government, being the first and model Islamic bank in the country and region," according to a December 19, 2005 article in Arab News.

"Bank Islam had a reputation in the market for being the spoilt child of the Malaysian Ministry of Finance; and the perception of the bank was more of a Muslim financial fraternity or government development financial institution," the report said.

In 2007, in what was called Malaysia's Enron scandal, the publicly traded Transmile Group Bhd, whose chairman was former MCA President and Cabinet Minister Ling Liong Sik, was caught having overstated its revenue by RM530 million. A pretax profit from Rm207 million in 2006 was actually a loss of RM126 million, and a pretax profit of 120 million in 2005 was a loss of RM77 million, causing the government postal company Pos Malaysia & Services Holdings Bhd to warn that its earnings for the 2006 financial year might be affected by the reported overstatement, as the postal group owned 15.3 percent of Transmile.

Over the years 2001 to 2006, the government had to spend billions to rescue seven privatized projects including Kuala Lumpur's two public transport systems, the perennially ailing Malaysia Airlines, the national sewage system and a variety of others that, in the words of one study, "had been privatized prematurely." The government also repeatedly bailed out highway construction concessionaires, all of them closely connected to Umno, to the tune of another RM38.5 billion.

In 2008, it was revealed that Rafidah Aziz, who had served as trade and industry minister for 18 years, had been peddling approved permits for duty-free car sales and allegedly lining her pockets. Two companies which didn't even have showrooms – one of which belonged to the husband of Rafidah's niece – received scores of permits. Although Rafidah came in for heavy criticism from within Umno, she remained in office until she was defeated in party elections.

In the 1960s, federal prosecutors in the United States who were attempting to jail the late labor boss Jimmy Hoffa for looting the Teamsters Pension Fund of millions of dollars with his cronies were puzzled by the fact that their revelations appeared to have little effect on the union's rank and file. It was because no matter how much money Hoffa and his cronies stole, there was always money left because the fund was so rich. That appears to be the case with Malaysia.